Michael Roth in dialogue at the Berlin Forum of NYC 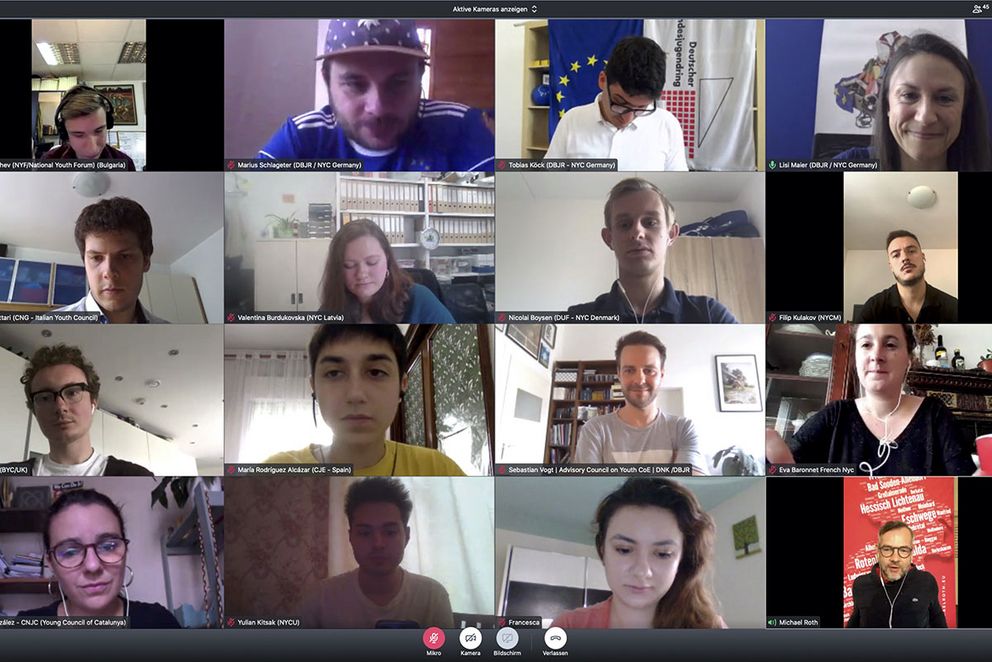 At the start of the German Council Presidency we met with more than 25 national youth councils from Europe at the Berlin Forum. They also spoke to Minister of State Michael Roth in an online conference.

Michael Roth, Minister of State for Europe, encouraged the representatives* of the youth councils to raise their voices: "Young people stand for the future of our continent," he said. That is why politics must take care of their concerns. Climate was an important issue, he said, and sustainability was therefore a high priority of the German Presidency. In the coming months, social, ecological and economic aspects must be combined. He called on the youth councils: "Please support us in this and criticise us where necessary".

Many people and member states in the EU have high expectations of the German Presidency. "The government has the same expectation, but Europe is always teamwork", said Michael Roth. This is particularly true in the current crisis caused by the Corona pandemic. The economic crisis years ago showed that the younger generation was particularly affected. It was then when the Youth Guarantee was developed, which is now playing a major role again. "We want to strengthen the Youth Guarantee", said Michael Roth. The Member States have already agreed on this and the Commission has submitted proposals. Everyone must now keep their word, the Minister of State demanded.

An important funding programme for young people is Erasmus+. Michael Roth emphasised that young workers* in particular must benefit from the programme to a greater extent than before. To this end, it must become more easily accessible. On the other hand: "I do not understand why employers are little interested in investing more in young workers* and encouraging them to participate in Erasmus programmes", said Michael Roth. Among other things, he said, Erasmus offers a great opportunity to strengthen language skills and to experience Europe.

The shape of the Multi-Annual Financial Framework (MFF) is crucial for the next few years. The Minister of State reported that some states are calling for a strong future orientation, while others are more interested in stabilizing existing structures. Michael Roth explained that Germany is clearly committed to a future-oriented approach. The Federal Government was relying on the proposal of the President of the European Council, Charles Michel, and that he could achieve a good balance of interests. The ecological and digital transformation were the major challenges. For this reason, skills in these areas should also be strengthened in Erasmus+.

An important issue for the Minister of State is the integration of the Western Balkans into the Union and the development of the Eastern Partnerships. The representatives of the youth councils from these regions who took part in the meeting expressed their hopes for the German EU Presidency to make further progress. Michael Roth said: "The Western Balkans and the Eastern Partnership will play a major role".

At the Berlin Forum, Michael Roth and the youth representatives* agreed: "The situation in Europe is not easy at the moment, but it can be shaped positively. The youth and thus also the youth organisations must play an important role in the way out of the crisis. An economic stimulus package must therefore also strengthen the structures of young people who are coming under pressure, Michael Roth said. The Federal Government would be happy to take the interests of young people into account during its Council Presidency. The Conference on the Future of Europe and the Youth Work Convention were formats for this purpose, but above all the EU Youth Conference in October. "These will be important opportunities to raise your voice and discuss good ideas for the young generation," said Michael Roth. He also asked: "Stay in touch with your youth ministries and gladly with me".