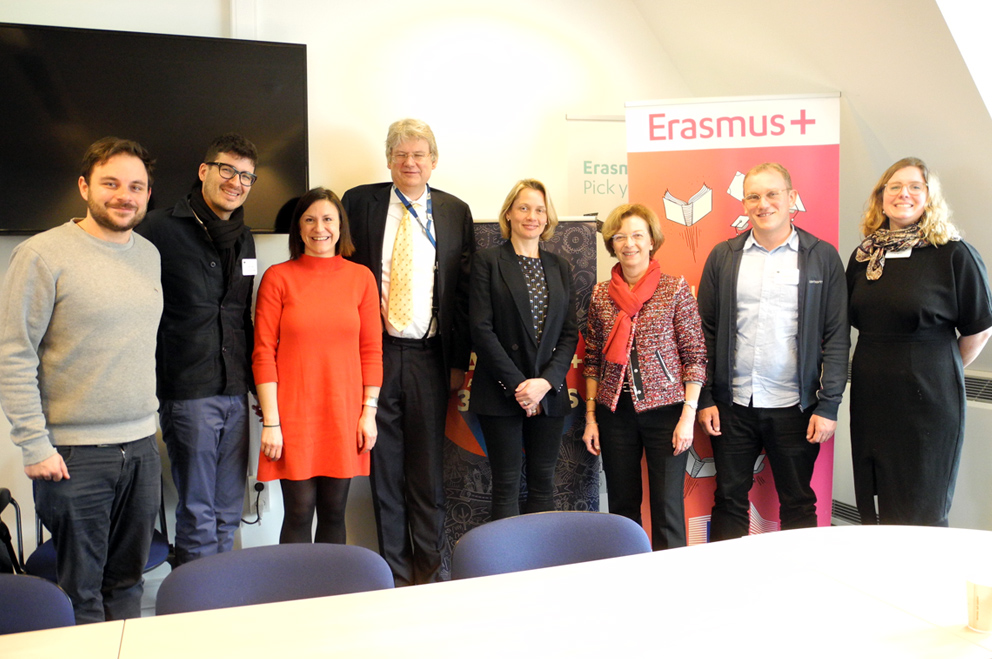 In Brussels we met representatives of the EU Commission and exchanged views on youth policy issues. We discussed Erasmus+, the situation on the EU's external border and the conference on the future of Europe.

First we met with Viviane Hoffmann, Deputy Director-General for Education, Youth, Sport and Culture in the European Commission. In this constructive exchange we clarified our positions on the further development of Erasmus+, the European Education Area and the role of civil society actors in European democracy. Viviane Hoffmann underlined that the European Commission sees youth associations and in particular the instruments of the EU Youth Dialogue as playing an important role in shaping the future of Europe.

With regard to the further development of the Erasmus+ programme, we explained that low-threshold access and financial planning security are essential for effective implementation. In addition to secure funding through the multiannual financial framework, however, continuity in terms of content is also needed. The programmes must not be implemented with the sole aim of preparing as many young people as possible for the labour market. Rather, the aim should be to promote education and exchange away from economic indicators. Furthermore, the programmes must be more inclusive and also be accessible to those who are financially weaker.

In the areas of education and inclusion, we believe that the non-formal sector must be given greater focus. Youth associations have a wide reach here and work down to the local level. Civil society structures also play an important role in the area of voluntary services, including in the support of volunteers. Organised civil society should therefore be regarded as a partner at eye level.

With regard to the planned Conference on the Future of Europe, we have insisted on effectively involving young people and structurally establishing the link to the EU Youth Dialogue. On the occasion of the EU Youth Conference, which we are organising together with the BMFSFJ as part of the German EU Council Presidency, Viviane Hoffmann underlined the importance of the resulting dialogue for the European institutions. The objectives of the Youth Strategy and the implementation of the Youth Goals are crucial for the Commission.

With regard to the situation at the EU's external border, we have clearly stated our position "SAVE LIFE! Ensuring sea rescue in the Mediterranean" adopted by the Plenary Assembly and referred to our statement "European values instead of barbed wire and tear gas". We expect European policy to finally put an end to the humanitarian catastrophe and create a refugee policy based on solidarity and human rights. Specifically, we have called for an immediate end to and prevention of refoulements and pushbacks at the Greek-Turkish border, which are contrary to international law, and violence of any kind against those seeking protection. Furthermore, the right of asylum in Greece must not be further suspended. The current situation on the EU's external border is a crisis of the European Union, of European values - and thus of the European Way of Life.

With regard to the EU's Green Deal, we expressed confidence and agreed with Catherine Sustek that the inclusion of the skills and needs of young people is essential for the successful implementation of the Green Deal.