"Large number of young people at the protests in Belarus" 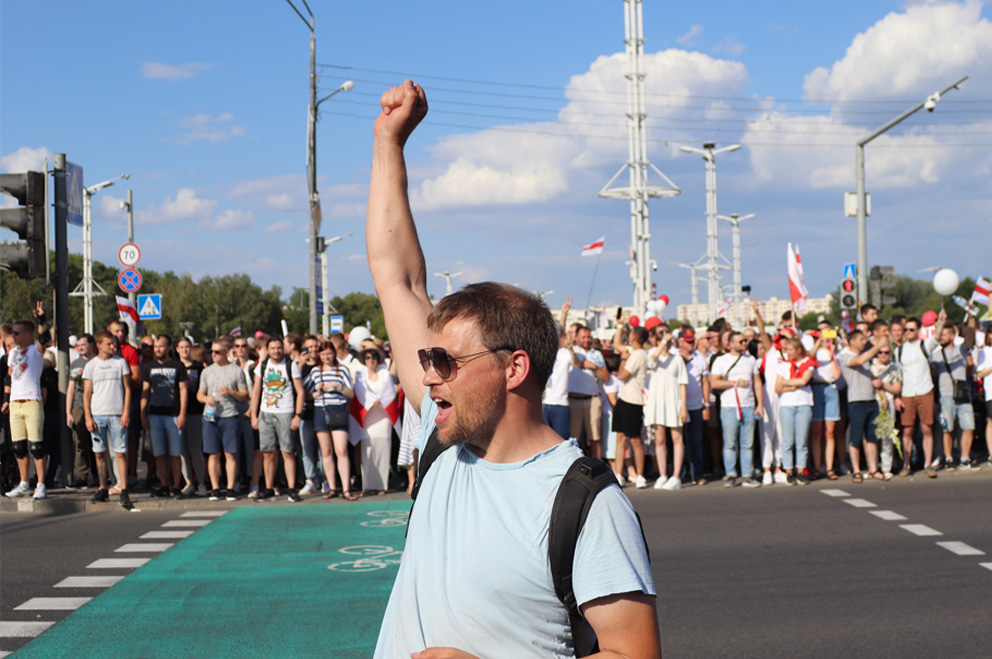 The rigged presidential elections in Belarus have triggered a wave of protest against dictator Lukashenko. A particularly large number of young people take part in the demonstrations in Belarus. Dzmitry Herylovich is chairman of RADA, the National Youth Council of Belarus. In an interview with ijab.de he describes the situation in the country and talks about the perspective of the youth, the role of youth organizations and the necessary support from the democratic world.

ijab.de: Dima, we last spoke around a fortnight ago. Meanwhile, a lot has been happening in Belarus. How are you doing?

Dzmitry Herylovich: Personally I’m well, thank you, even though I haven’t really had a good night’s sleep for three days. Too much has been going on, as you say. Yesterday we published a new appeal against police violence and the torture of prisoners and sent it to the attorney general, the presidential administration and other institutions. We demand the setup of two public commissions, one to investigate police violence in the streets, the other to examine the torture of inmates. By law, the recipients are required to respond to the appeal within 14 days.

Meanwhile, the EU has adopted a clear position and indicated it will pledge resources to aid civil society. While I’m not sure how that will work in practice, it is a step in the right direction. Also, the EU has said it does not recognise the outcome of the presidential elections and so it does not recognise Lukashenko as president of Belarus. This support from the democratic world is valuable to us.

The employees of government-owned businesses have also decided to join the strike. This is very significant, although of course we are aware that our economy will suffer. Other companies, including some in the energy industry, have scaled back operations because they cannot stop completely for technical reasons. If they did, it would take months to ramp up again.

More and more groups are joining the protests. The latest people to join are prominent athletes, who have declared they will no longer play for Belarus’ national teams while Lukashenko remains in power. Museum and theatre workers have started protesting, too. Healthcare workers have published an incredible appeal in which they demand Lukashenko’s resignation, the provision of medical care to prisoners, and accurate statistics about the spread of Coronavirus.

A few days ago a coordination council was established that plans to manage the transition to a new government. Its most prominent member is the writer and Nobel laureate Svetlana Alexievich. The council consists of between 50 and 70 members - in fact one of our member organisations’ representatives applied to join – and has an executive committee.

Let’s talk about the situation of young people. A couple of days ago I spoke with a friend in Minsk. She has been protesting the elections too and was shocked at the brutality of the police. She told me that for the first time in her life, she is actually thinking about emigrating. Is this the kind of perspective young people should expect if Lukashenko remains in power?

Herylovich: I’m not sure, since there have been no surveys on this. The fact is, young people continue to account for the majority of protesters. Some who have suffered violence at first hand would definitely benefit from psychological help in overcoming the trauma – preferably outside of Belarus, somewhere they are not constantly under threat of repression. Should the situation deterioriate and the dictatorship descend into totalitarianism, I’m sure some will go into exile. Lithuania and Poland have already stated that they will facilitate the immigration of asylum-seekers from Belarus. But at the moment nobody is thinking about leaving. A change of power is a long process that we expect could take six months or a year. The conflict may transform from the open fire it is now to a long slow burn before it is finally extinguished.

Herylovich: To this day, the young generation of Belarus has no voice. But young Belarusians want their voices to be heard. They want to make their own choices. Until now they have been subject to many restrictions: don’t do this, don’t do that. Our youth will ensure that Belarus develops a more creative culture with more music, more theatre, more nightlife. As RADA, the umbrella association of independent youth organisations, we want to make that happen. We know how youth policy works. We know how to make voices heard.

Many observers are drawing parallels to what happened on the Maidan in Ukraine. We know that some of of Ukraine’s old institutions have survived the movement for change intact, including corruption. Should more young Belarusians consider going into politics?

Herylovich: The first thing we need is a youth ministry that engages in making youth policy and involves young people in the process. We can already see that more and more young people are getting involved in politics. I expect the youth chapters of the political parties will receive more applications for membership. Maybe we will even see new political parties emerge, with young people playing a special role within them.

However, there is one crucial prerequisite for this: Lukashenko must go, we need free and fair elections, the prisoners need to be released, and those responsible for the violence of the last few days need to be tried in court. These are our core demands and nothing else will be discussed until Lukashenko goes. Unlike the Maidan movement in Ukraine, this is not about choosing a European versus a Russian perspective. I’m not sure if you noticed, but since the protests began there have been no burning cars, no smashed windows, no looted shops and no radical groups on the streets. This is how we are reclaiming the city. It is our city and 99 per cent of us advocate non-violent protests.

What support do you need from the outside?

Herylovich: The EU’s political backing, which involves withdrawing funding from government projects, is a major signal. We need international support and I would like to see that support from the UN, too. For instance, there could be an international inquiry into torture. Once the details come to light, even Russia will have to think carefully about whether they want to continue to back Lukashenko.

We also need more freedom of movement and more youth mobility. Young people must be given an opportunity to experience what it’s like to live in a democracy, so when they return they can put their experience to good use. Ukraine could play a strong role in this regard, because it’s one of the few countries we can travel to without a visa. But we need easier access to the Schengen space, too.

Those are your needs on the political level, as it were. How can civil society help?

Herylovich: Civil society groups can spread authentic information coming out of Belarus. They can put pressure on their own politicians, they can protest outside the Belarusian embassies abroad. But what is even more important is direct cooperation both conceptually and structurally. All countries have youth organisations, student organisations, environmental organisations and much more. They can work together, seeing as they share many common issues and work for and with the same target groups. But here in Belarus you need to be careful who you work with. We have organisations that call themselves NGOs but in reality are controlled entirely by the government.

It is vital for us that existing relationships are maintained, that authentic information gets out, and that we get help raising funds for strikers and prisoners. Another issue is reliable information from here and abroad. Most of our media are government-controlled and spread the government’s lies. Independent media are threatened. Media such as Radio Free Europe or Radio Liberty need to step up their reporting, and support must be offered to independent Belarusian media.

This interview first appeared on 21.08.2020 on ijab.de. The head of our Department for International and European Youth Policy, Jochen Rummenhöller, represents the Deutscher Bundesjugendring e. V. on the board of IJAB - Fachstelle für Internationale Jugendarbeit der Bundesrepublik Deutschland e. V.