U18 European elections send a clear signal to the parties 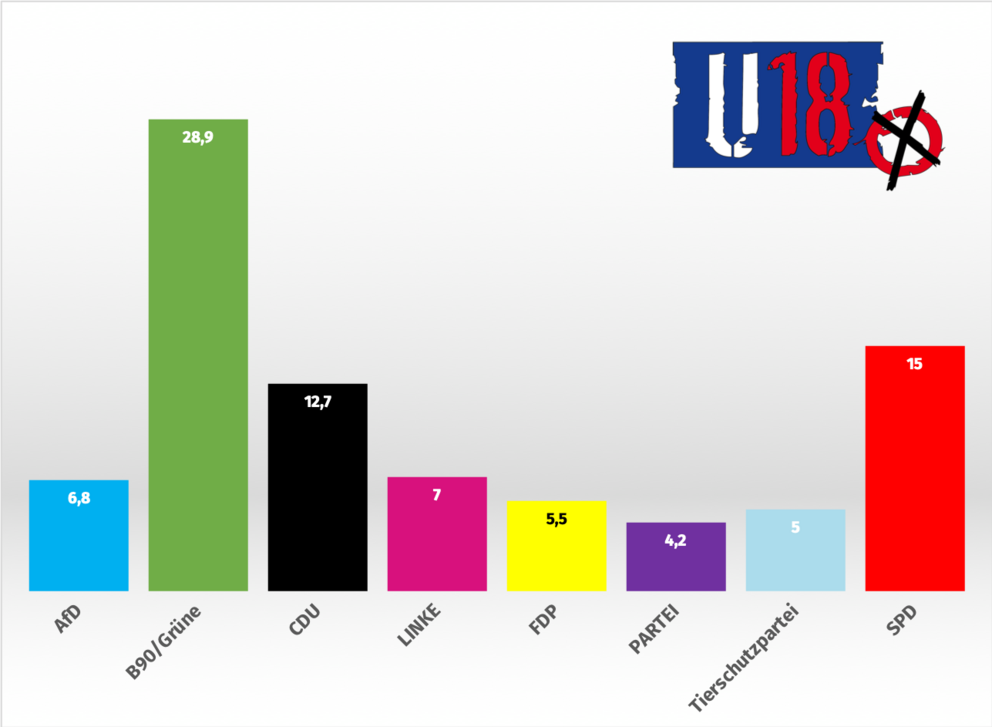 In the U18 elections, children and young people made it clear what they wanted the European Parliament to look like. Bündnis 90/Die Grünen are the clear winners with 28.9 percent, ahead of SPD (15 percent) and CDU (12.7 percent). The Left (7 percent) and the AfD (6.8 percent) are roughly on a par, followed by the FDP with 5.5 percent.

Smaller parties can also score with young people. The Animal Welfare Party (5.0 percent) and PARTEI (4.2 percent) also received noticeable support. A week before the European elections, the results of the youth elections are a signal to politicians and other generations. Children and young people vote for pro-European parties. They give a voice to those who make environmental protection and concrete action against climate change a crucial issue. Furthermore, they show the parties of the Grand Coalition that they did not represent the interests of the young in the question of copyright reform in Europe.

"The large participation in U18 shows that a great many children and young people are interested in politics, and it is to be hoped that political commitment will also emerge from this. But U18 is also a clear sign of lowering the voting age limits in Germany. We need a reduction to 16 years at all levels, from the local elections to the European elections, and in a second step to 14 years," stresses Thomas Krüger, President of the German Children's Fund.

Federal Minister of Youth Franziska Giffey is behind the idea of U18. "Elections are one of the greatest assets of our democracy. Elections determine politics and politics directly affects the young generation. It's good that young people make themselves heard with the U18 election. I am grateful that so many have voted at U18," she says.

U18 is one of the largest political education initiatives organised by and for children and young people. So that children and young people can use U18 for themselves, the U18 Initiative organizes and supports the German Children's Relief Agency, we as the German Federal Youth Ring, the state youth rings, many youth associations and the Berlin U18 network. We are coordinating the European elections for 2019, as we did for the 2017 federal elections. U18 for the European elections is sponsored by the Federal Ministry for Family Affairs, Senior Citizens, Women and Youth and the Federal Agency for Civic Education.