Interview with the new youth delegates to the UN General Assembly 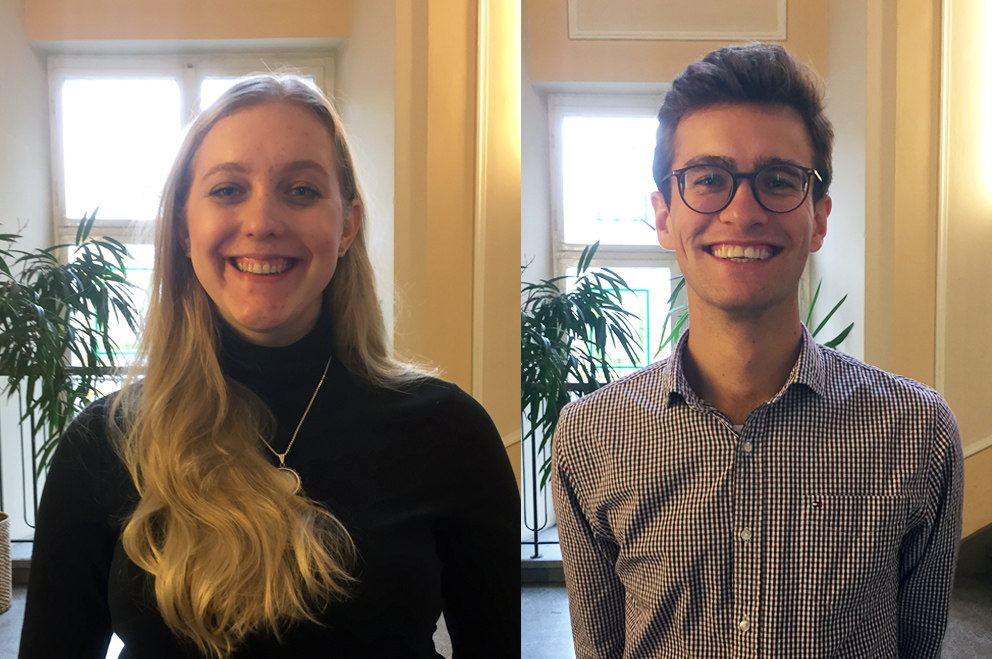 Eva Croon and Paul Klahre are the new youth delegates to the United Nations (UN) General Assembly. In an interview, the two talk about their goals and expectations, the importance of the perspective of young people and their very personal relationship to youth organisations.

Since 2005 there are two youth delegates in Germany who accompany the German delegation to the United Nations General Assembly in New York and ensure direct youth participation at the international level. They are committed to the interests of young people by bringing the wishes and needs of young people closer to political decision-makers as experts in youth issues.

Eva Croon and Paul Klahre have been selected as new youth delegates to the UN General Assembly for 2020. Their one-year term of office consists mainly of two parts. In the first phase they will collect the opinions, visions and demands of young people in Germany. The highlight of the second phase will be their participation in the United Nations General Assembly in New York in October. They will also make the interests of young people heard at the Social Development Commission in February.

Eva is a law student in Cologne and is active as an international ambassador for the German Youth Red Cross. Paul is the International Officer for the German Scout Association Sankt Georg and is studying International Relations in Dresden. In an interview, the two talk about what volunteer work in youth organisations means to them personally and what expectations they have of their time as youth delegates.

Question: What are your expectations and goals for your time as youth delegates?

Eva: We are currently in the process of arriving at the office, finding our way into all ongoing processes, establishing contacts with our partners and getting to know ourselves. We already know that the year as Youth Delegates will be very demanding and eventful and we are looking forward to it incredibly!

Our expectations focus on a lot of exchange with young people in Germany. Due to the current situation, we have to come up with a lot of new ideas in order to provide a high-quality online offer. We expect a good cooperation with our sponsors and partners. Also during our time at the United Nations in New York we hope for the most intensive and productive exchange possible with the Permanent Mission of Germany, the Youth Envoy Office, the EU and other delegates, but above all the youth delegates of other countries.

Our primary goal is of course to make the exchange with young people as inclusive, diverse and constructive as possible. We see potential in exchanges with youth organisations. In doing so, we attach great importance to reaching young people who are not yet politicized and who may not even know what the United Nations is. We would like to collect ideas, opinions and demands from young people and implement them as effectively as possible in UN politics - in speeches, resolutions and joint statements. In addition, we will also raise awareness of UN content, inform and sensitize young people to the fact that the UN advises on issues of everyday life. We would like to communicate these in a low-threshold way to invite an exchange. We would like to work with other youth delegates, nationally and internationally, on content, cooperate a lot and strengthen them.

Question: Why should the interests of young people be represented at the United Nations?

Paul: All political decisions of today affect us young people. That already explains why young people have to participate in shaping the United Nations. If more people understand this, a lot has already been achieved. Cooperation between states depends on interests and opinions - not scientific knowledge. Is there a single argument against young people helping to shape these interests? Of course not, quite the contrary: there is every reason to put young people's issues at the top of the agenda of decision-makers.

Question: How important is the work of youth organisations for you personally?

Paul: The German Scout Association of Sant Georg (DPSG) offers me as a youth organisation a place where I can develop from a young age. Experience great group dynamics, test out abilities, have fun and learn more than anywhere else. Youth organisations also offer the structures to enable engagement and to mobilize resources. As part of the national leadership of the DPSG, I experience how much creativity, heart and knowledge different people can bring to an organisation. It is very fortunate that organisations in Germany make so many offers for young people. I feel that these opportunities are a great privilege, which is unfortunately not the case in many other countries.

Since I have been really active in organsisation work again, I have rediscovered an important part of my identity. A part that I like very much. Because in youth organsisations it is not the economic or school/academic performance that counts. Here individuality is appreciated, everyone can find a place. My experiences in organisations always have to do with the rejuvenation of structures. In some committees I was suddenly the youngest. This is the right development, because young people have to make decisions in youth organisations.

Of course, youth organisation work also means a great deal of time for me. That is why I would like to take this opportunity to express my admiration for all the committed volunteers in their organisations, who leave behind a great achievement and thus our world a little better than we found it - as the founder of one of the world's largest youth movements once said.

Eva: Youth organisation work, as an extracurricular educational opportunity, is an important and valuable way to experience and help shape democracy. In organisations, the relatives critically deal with the issues of their hearts and thus influence their environment according to their wishes.  Young people learn to express their needs, interests and concerns. These are then carried into the discourse of society as a whole and are given the opportunity to communicate these to political parties, elected officials, the administration and other groups and organisations involved in political decision-making through appropriate structures such as the Youth Council.

I have been a member of the German Youth Red Cross for over seven years and was able to develop my skills as a leader at an early stage. My home organisation has always offered me a space to live out, try out and develop myself. The great thing about it is that the organisation structures have not only allowed commitment at district level, but have also shown ways to national and international involvement. To speak with Malaysian young people in Malaysia while planting mangroves and to get to know their living environments, or to speak about statements on how to better implement international human rights from a youth perspective for the General Assembly of the Red Cross Red Crescent Society through the structures of my youth organisation is an absolute privilege that I would like to make possible for other young people. To broaden one's own horizon and experience other ideas is an opportunity that every young person should take advantage of. But the best thing about all the work in the youth organisation is the feeling of having found a second home.

The Youth Delegates Programme is under the sponsorship of the German Association for the United Nations (DGVN) and the German National Committee for International Youth Work (DNK). The DNK is a working group of the German Federal Youth Council, the German Sports Youth and the Ring of Political Youth. Further information is available at www.jugenddelegierte.de.