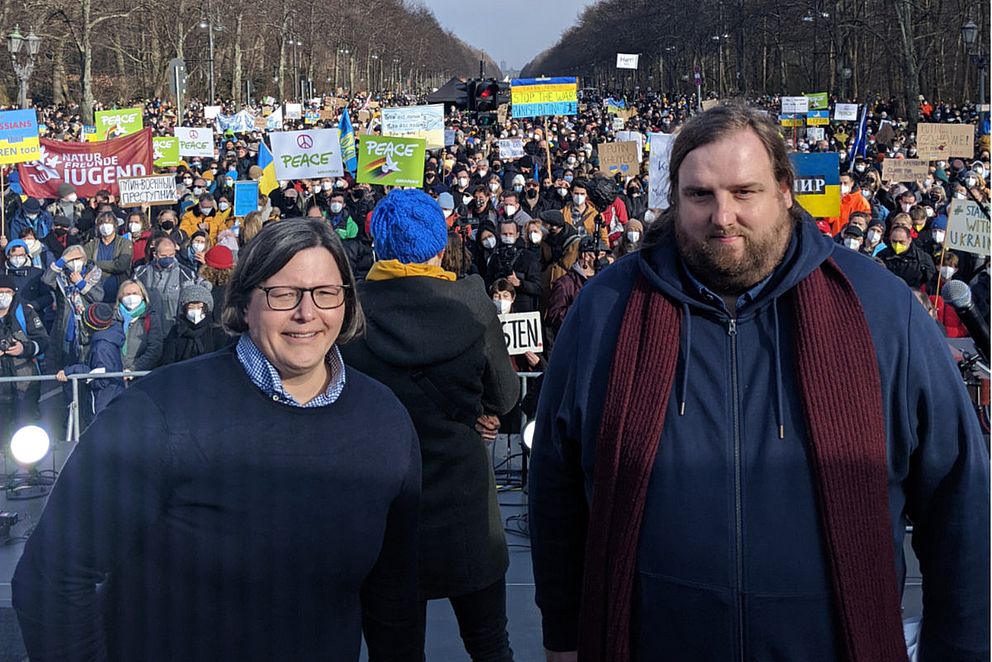 Together with a broad alliance of civil society organisations, the German Federal Youth Council called for a demonstration for peace in Ukraine. Several hundred thousand people gathered in Berlin and demanded that President Putin end the war immediately. The Bundesjugendring Presidents spoke on stage to the participants of the rally.

Daniela Broda, President of the German Federal Youth Council, made it clear that the National Youth Council Ukraine had campaigned for a peaceful and diplomatic solution until the very end. "Now their lives are threatened. But they want to continue. They will continue to work for peace, security and democracy in their country," she said. She promised that the German Youth Council would do everything to ensure that the important work of the Ukrainian Youth Council can continue.

Wendelin Haag, President of the German Federal Youth Council, drew attention to the children, adolescents and young people who are particularly suffering from the war. Fear of detonations, of gunfire during the day and at night, fear for parents, siblings, relatives and friends invaded their lives overnight. "The young people who are committed to democracy, freedom and peace in Ukraine must now experience how all this is being destroyed by Putin and his regime," said Wendelin Haag. At the same time, he turned his attention to many young people in Russia who do not want this war and are demonstrating against it despite state repression. Looking at the people fleeing the war, he said: "What we can do is to be ready. To be ready to open our doors to the people from Ukraine, to listen to them and give them a safe place."

What is coming to fruition now, he said, are the close contacts across national borders. Even in these difficult times of war, they are the result of international civilian cooperation over many years. Daniela Broda emphasised: "In the international youth exchange lay and still lies the great chance to secure peace in Europe and between states in the long run: in youth encounters, in international camps and joint political work on a European and international level". A peaceful future for Europe could only be achieved with the young generation across national borders, she said.

The youth associations in the German Federal Youth Council are convinced that tough sanctions are now needed against Putin: But no arms race! What Putin has been trying to nip in the bud in Russia for decades is democracy and a plural civil society. "Let's not do him the favour of being successful with his strategy. Let's rely on our soft power. On peace, reconciliation, human rights and a consistent policy of détente," Wendelin Haag appealed to the demonstrators. For this, civil society in Europe and the friends in Ukraine need support from the democratic governments of Europe.