"We cannot allow ourselves to be afraid" 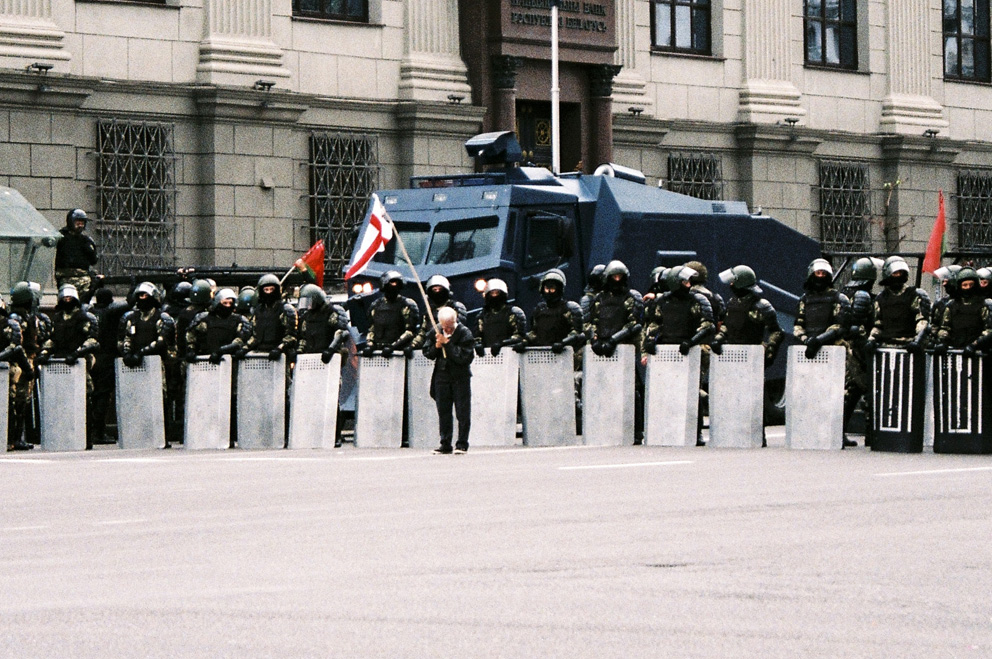 Our partner RADA, the National Youth Council in Belarus, has been forced to suspend its work in the country. Marharyta Vorykhava, chairperson of RADA, described the situation of civil society in an interview with ijab.de. She says: "We won’t stop the nonviolent resistance against the violations of human rights in Belarus."

ijab.de: On 23 July, RADA was declared dissolved by the Belarusian Ministry of Justice. Can you describe the legal situation?

Marharyta Vorykhava: RADA was officially registered as a National Youth Council in 1997 and was functioniting on the legal basis till 2006, when the Ministry of Justice made a decision to liquidate the initiative. After that we’ve registered another organisation named “Ya Rada” to be operating on the grounds of Belarus. But again, on the 23d of July together with the other 50+ organisations, the National Youth Council was deprived of its legal status. So, in fact, we are dissolved. If we nevertheless continue to operate as an umbrella organisation of Belarusian youth associations, this can be considered illegal activity - with the corresponding legal consequences. Every event, every meeting can be declared illegal and a violation of the law. The regime has clearly stated that “civil society will cease to exist”.

What is the risk for you and other civil society actors?

Vorykhava: As Belarus is undergoing a complete "cleansing" of NGOs, it is an extremely high risk. Offices of the organisations and a lot of their representatives were searched and arrested for obscure reasons. We have to resort to informal meetings of "friends" or meet online. Everything else is too dangerous.

Are you personally afraid?

Vorykhava: Yes and no. Everyone who has anything to do with NGOs has to be afraid of being arrested at any time. In the meantime, this has taken on absurd features. Recently, the chairwoman of an association working for the preservation of the Brest fortress was arrested. [The fortress of Brest was an important bastion of the Red Army's resistance against the advancing German units in the summer of 1941. The fortress is a national memorial. Ed. note by ijab] Though as fear is exactly what the regime is striving for, we cannot allow ourselves to be afraid.

When we spoke in November, you were still optimistic that the resistance against Lukashenko would succeed. In the meantime, the tide has turned. Has some of your optimism remained?

Vorykhava: Yes, the big street protests have stopped. But that doesn’t mean that people gave up and lost their faith. We won’t stop the nonviolent resistance against the violations of human rights in Belarus, we won’t forget what has happened a year ago, we won’t betray the democratic principles as the regime did. The resistance continues in the form of international advocacy campaigns, negotiations with partners, gathering the information on those who are violating the law, publication and dissemination of information, scientific and human rights materials providing the necessary assistance to those affected by the regime.

Are your affiliates affected by the arrests of the last weeks and months and what is the situation of political prisoners in general?

Vorykhava: At the moment there are estimated 631 political prisoners and the number is increasing rapidly. Some volunteers from our affiliates have also been arrested, beaten up in prison and then sentenced. We try to support them as much as possible. Nevertheless, we are still stating that we will get our country back.

Russia supports Lukashenko. How much concern is there that Putin will use the opportunity to swallow Belarus?

Vorykhava: Yes, we are dealing with a coalition of regimes. Putin has influence on Lukashenko and the dissolution of the NGOs may be one of the agreements between them. As for the "deeper integration" of Belarus into the Russian Federation, I hope it will never happen. I want to continue living in an independent country. [The "deeper integration" is a 1999 treaty that provides for the creation of a union state between Russia and Belarus. However, Belarus has never taken steps to implement this treaty. Ed. note by ijab] In view of the catastrophic economic situation as a result of the sanctions, Lukashenko is now grasping at the last straws. We can see the situation on the Belarussian-Lithuanian border with the immigrants from Iraq. Was it all planned? I don’t know, just observing the consequences of some decisions made by certain people.

Vorykhava: The sanctions are important for us. They contribute to the destruction of the political system, even though that may be a long process. Europe is accelerating this process. Of course, sanctions make the economic situation worse and many people feel that. Thus we don't just need sanctions, we also need support - for example for those who have lost their jobs, who need legal aid or who had to flee abroad. In Germany, too, there are funds to which donations can be made and which then use the money accordingly. There are still problems with the issuing of visas, even though Lithuania in particular has done a lot to help. Europe could do something about that.

How many people have fled abroad?

Vorykhava: It's hard to say, because ironically our National Statistics Committee didn’t publish any figures this year. I would estimate about 25,000. Though the number is continuously growing as today in Belarus there is no person who would not be touched by repressions. It is not even the quantity that matters, but we should pay more attention to who is actually leaving: thousands of IT specialists, entrepreneurs, doctors, students, artists, journalists, human rights defenders and many more.

This interview first appeared on ijab.de on 16.08.2021. The head of our department for International and European Youth Policy, Jochen Rummenhöller, represents the German Federal Youth Council in the board of IJAB - International Youth Service of the Federal Republic of Germany.