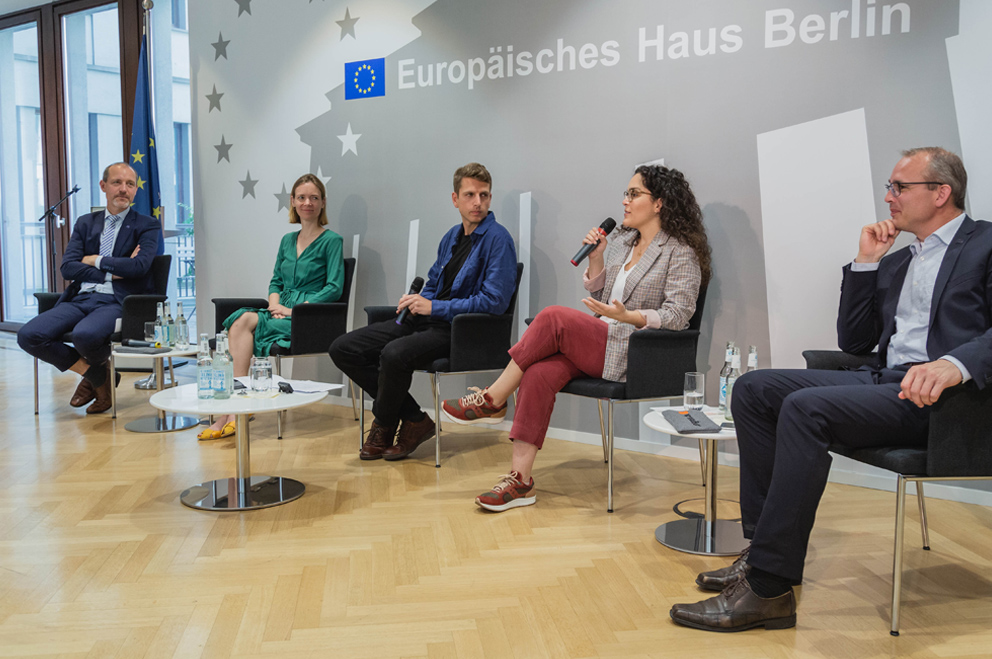 At the end of the participation project for the Conference on the Future of Europe, young people discussed the results with political leaders. In addition to the evaluation of the final report, the main topic was the further process of youth participation at the European level.

Margit Gottstein, State Secretary at the Federal Ministry for Family Affairs, Senior Citizens, Women and Youth (BMFSFJ), welcomed the participants to the European House in Berlin. She said that the German Federal Youth Council (Bundesjugendring) summed it up with the event's title: "You have to do Europe yourself!" The conference on the future of Europe offered the opportunity to do so. With its participation project, she said, the Bundesjugendring had put a lot of commitment and heart and soul into shaping and improving Europe. The report on the results of the EU Future Conference provides a good starting point for the further process. For the BMFSFJ, cooperation with organized young civil society is very important.

Anna Cavazzini said the conference and its results showed that many people wanted more Europe. This, she said, countered the narrative of too many competences at the European level and gave tailwind to those who had a forward-looking view and wanted to reform the EU.

Tobias Winkler emphasized that it had been possible to hold a Europe-wide discussion that had brought both expected and surprising demands. Now the real work would begin and for this there would need to be a procedure for dealing with the results.

Özge Erdoğan followed this up by describing the criticism of the conference process that had been voiced in many quarters. It had been unclear, for example, what would happen to the input into the online platform and it was still unclear what would happen to the results in concrete terms. In addition, there was a lack of involvement of organized structures from civil society - such as youth associations. Nevertheless, the report shows that young people are not only interested in youth policy. They have opinions and demands in all fields. That is why structural and effective youth participation is needed in all policy areas.

Referring to the results of the Future Conference, Jörg Wojahn said that EU Commission President Ursula von der Leyen had promised to draw up concrete proposals from them. It would then be the task of the European Parliament and the member states to pass corresponding legislation. Among the demands that are feasible and can be implemented without changing the EU treaties is the youth check, for example.

Özge Erdoğan welcomed the fact that the youth check is included in the final report of the Future Conference. This would make it possible to check the effects of proposed legislation on children and young people. Anna Cavazzini emphasized, however, that the implementation depends on the details and that the results must also be taken into serious consideration. She wants to strengthen youth participation in any case and takes with her as a homework from the discussion to organize a youth hearing in her committee in the European Parliament. To this end, she would remain in contact with the Bundesjugendring.

Young people from the audience also participated in the open discussion. Representatives of the national youth ring from Belarus visited Berlin and the European House as part of a study trip. In their speeches they pointed out that Germany and the EU should recognize political refugees from Belarus as such. This still happens far too seldom. The members of RADA, as civil society activists, are exposed to repression and persecution in Belarus and most of them have to live in exile.

Representatives of the Turkish youth representation GoFor, also guests at the Bundesjugendring, advocated in the discussion to enable participation in the EU also for Turkish youth. Even if the national youth council in Turkey is not recognized by the government and the country is not a member of the EU, there are possibilities - for example, through the European Youth Forum, of which GoFor is a member. They also urged the EU to take seriously President Erdoğan's authoritarian behavior and restrictions on civil spaces. Russia's development, they said, is an example of what can happen if this is not countered in time.

In further contributions, members of the German Youth of the Deaf emphasized the need for low-threshold and barrier-free participation of all young people. Özge Erdoğan underlined this demand from a youth association perspective. She concluded by saying: The European Year of Youth is a good time to call for comprehensive youth participation. The results of the EU Future Conference offered a good opportunity for further work. The Bundesjugendring will continue to accompany the process and make sure that this happens in the interest of young people.

The full report of the EU Future Conference can be found here.

The event was organized by the Bundesjugendring in cooperation with the Representation of the European Commission in Germany and the Liaison Office of the European Parliament in Berlin and with the support of the Federal Ministry of Youth.